Katja Jurkovšek,
Consultant, In516ht
Helping companies to be data-driven by bringing technology and business together

During your first encounter with SqlDBM, you shouldn’t look at it as just another ERD tool. Well, at first glance most of us would surely agree that it stands out with its good looking, user friendly interface. What’s not to like here – that soothing-for-the-eyes dark theme with just enough vivid colours to stand out and show the structure and the possibility of seamlessly creating tables and defining relationships between them… without writing a single line of code.

For a more insightful explanation we’ve reached out to our customer, Amir Komić, a Data Warehouse Architect at Petrol d.d., which is a Slovenian sustainable energy company that trades in oil derivatives, gas and other energy products. It has been in operation for more than 70 years and is now one of the largest and best-known Slovenian companies. Today, Petrol’s retail network comprises 500 modern service stations with the company having more than 5,000 employees. Headquartered in Ljubljana, Petrol has branches across south-eastern Europe.

Petrol chose Snowflake’s cloud platform for their data warehouse and our team at In516ht is successfully collaborating with Petrol on the data warehouse modernisation project.

Today, Petrol is working on their data warehouse alongside other partners, each managing one part of it. Before Amir decided to shift to SqlDBM, each of us used two different on-premise modelling tools. The biggest challenge the teams were facing was the inability to see the full picture when it came to the entire model. Problems happened when Amir and his team wanted to import their partner’s diagrams into the ERD tool. The structure collapsed. It was impossible to synchronize the two and what often happened was that each team saw the diagram a bit differently than the other. But that was just the beginning of the problem.

It not only took multiple steps to sync everything, it could take up to 2 weeks in order to prepare the diagrams for the BI team. The ‘up to date’ situation was never as the name suggested, it always came too late – and we all know what that can mean for the business.

Shifting to SqlDBM we
lowered the bill and gained many assets Amir Komić, a data warehouse
architect at Petrol D.D.

The decision to ditch the former ERD tools for all those involved was not something that needed much thought because of the many benefits that came with SqlDBM. It’s important that we’re talking about SaaS technology here, which is very much needed in the growing cloud environments.

With some of the former solutions it was a painful process just to extend the licenses and there was a waiting period of up to two weeks before the license was valid again. Who would want that? We need to mention here that both former solutions we used are well known, respected and widely used data modellers. Needles to say that this does not come without an expensive price tag.

Now that we have this tool available online, any member of the team can access the project. ZERO management, no sync, no waiting times. Simply sign in and see the up to date, real time situation. SqlDBM solution eliminated many administration tasks for Amir and his team. The minute somebody works on it, anybody who is part of project sees the final picture. A small price to pay for getting something so valuable out of it – especially when compared to the previous situation. Our next point describes how all of this is made possible. 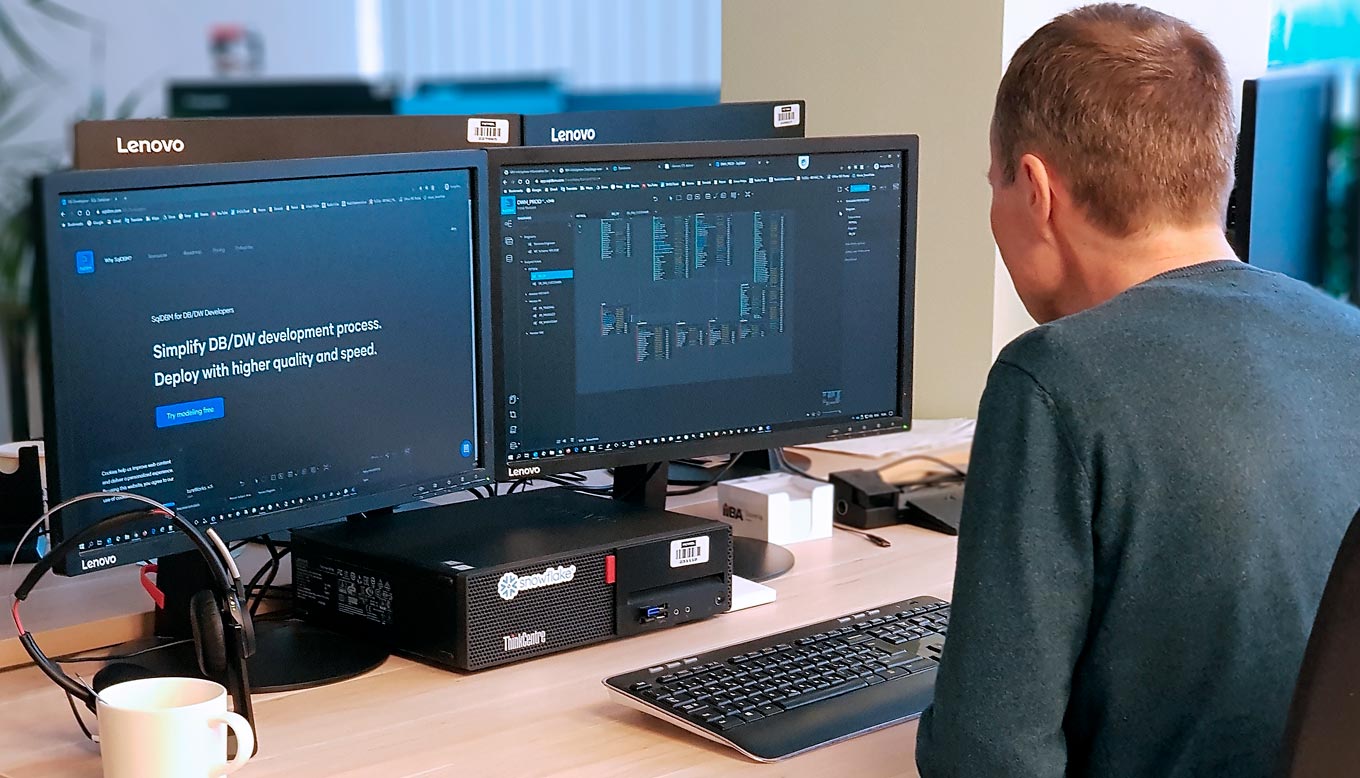 BI team leader in Petrol D.D. that is checking model in DW through SqlDBM

One of the things we really appreciate about the SqlDBM team is that they are genuinely interested in what their users have to say.

One of the things we really appreciate about the SqlDBM team is that they are genuinely interested in what their users have to say. You see that in the constant improvements that make your job easier. And the Team project collaboration is one of them.

Let’s say you have a project you’re working on available online – you can create team members and assign them roles. These can access the project whenever, wherever. Every member of the projects has the same view, everybody is working on a unified methodology and anyone who ‘checks-in’ has the latest info. The up to date diagram is now always available for everyone involved. Team collaboration was, for us, one of the strongest features that made our work a whole lot easier.

Team members can have permissions to ‘Edit’ or you can allow them to ‘Read only’. This is useful when you want a department to check on the situation regularly in order to be up to date but you don’t want them to mess with it. This is why the BI department at Petrol have the viewer roles without editing rights. However, they could still play around with the diagram in order to discover interesting viewpoints, take a screenshot and send it to the development team to try out their version.

Furthermore, every time somebody saves their work, a new version is created, and each version can be addressed with a label or comment. Any member can go back as many steps as they want to in order to see the former versions and are able to see who changed what. Somebody messed things up or is the current version not something you hoped for? No problem, you can always go back as many versions you’d like and re-start from there. And don’t worry – while one of the members is editing the diagram, no one else can until they are done.

On DWH projects we usually have at least two environments – i.e. one for production and the other for testing and development. We find it very helpful to have an instant view of both environments so that we can easily compare the two. Once you create a desired development structure, you can easily integrate the changes to the production environment. All you need to do is to deploy the Alter scripts to production instead of rewriting the logic.

The ability to reverse engineer was a very practical thing to have, since Petrol didn’t start their DWH from scratch. In such cases, this feature is very practical. Simply import the existing model into SqlDBM, which is then built automatically and you can immediately start with forward engineering.

Later on, once all the complexities and details are decided, you can simply generate all the necessary SQL statements that are needed to build your DB/DWH.

Still indecisive?
Don’t take our word for it, go to: https://sqldbm.com/ where you can try it out for free and learn more about how it can help your work and organization.

Less than a year ago, in May 2019, SqlDBM answered to another request from their users and partnered up with Snowflake. This means that you are now able to seamlessly create data models in SqlDBM and then generate Snowflake DDLs. Aside from Snowflake, SqlDBM is also compatible with MS SQL Server, MySQL, PostgreSQL and Amazon Redshift. It even allows you to convert projects between them. The process is speedy and no additional work from your side is needed (changing the code, transformations etc.). Needless to say, same as with many of the above features, hours of work can be saved.

Our site uses cookies to support its functionality and personalize the user experience. The following types of cookies are used:
Strictly Necessary
These cookies are required for the site to function correctly. Strictly necessary cookies store temporary session information, which only includes the minimum required information to support site features.
Functional
Functional cookies store information to enhance the user experience on a website by personalizing it to the user's locale or language. These cookies are anonymous and do not store any information about browsing activity on other websites.
Marketing
These persistent cookies track user web activity to promote targeted advertisements through trusted third-party providers. They are used to inform marketing efforts for ourselves and our partners.
Terms of Service